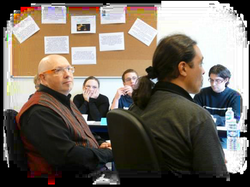 Besides the preparatory phase the Job on trial session requires the setting up of several groups of "actors and actresses" which will play certain roles close to a court hearing. These might include:


Mr. Justice - group presents the trade or job which is considered to be unattractive. He delivers the conduct of the proceeding.

Private party or prosecutors - who argue on drawbacks of the job, this role is often played by trainees or job seekers.

Defense attorneys - composed of professionals and vocational training experts from the specific trade. They give evidence of the trade`s

advantages and by this try to dispel prejudice and stereotypes.

Jury - analysis the arguments and will provide a conclusion drawn from the hearing, trying to close the gap between image and the reality of the

Registrars - they record the trial, making notes on advantages and drawbacks

The proceeding of the JOT-Job on trial sessions include a presentation of the trade and attendees by Mr. Justice, which will then be followed by a session of pro and con arguments: The prosecutors presenting their negative aspects and critics of the trade on trial, the attorneys present the pro arguments which will all be recorded on a white board by the registrars group. The accused leave the room for approximately 20 minutes to prepare their defense. After return they now present their defense of the Job on trial, striving to convince all participants about the advantages of the trade, also in aspects of gender equality. This is followed by the closing argument presented by the attorney. Now the Jury, who was required to take notes about the arguments throughout the process, will ask complementary questions, deliberate and will then deliver their final verdict. Being asked to present positive aspects, advantages as well as suggestions on how to overcome remaining obstacles. Mr. Justice than closes the session.

The aim is to close the JOT-session with a positive attitude and outcome towards the trade on trial. The court sentence is always the dismissal of the accusation. 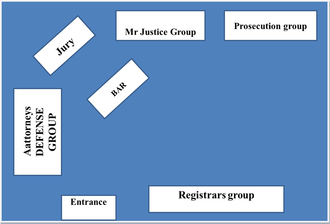 Example of Job on trial session set-up (of course these might change according to the set-up of a court trial in your country).

For a detailed presentation of the pedagogical objectives & organisation and proceedings as a download document go to the material page of this website.